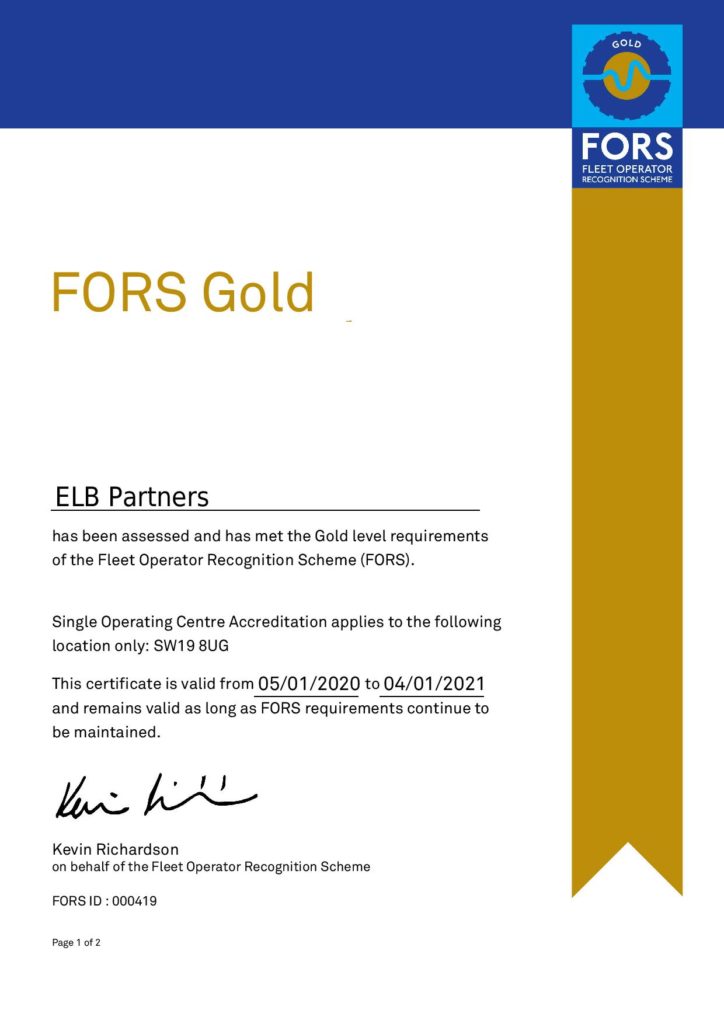 Christmas has come early for ELB Partners Ltd, which has retained the Fleet Operator Recognition Scheme (FORS) Gold standard, the top accolade for the safety and environmental best practice in the logistics sector, for the sixth consecutive year.

At the same time, the Wimbledon-based business, a member of the award-winning Pallet-Track network, also confirmed its retention of the FORS Silver and Bronze awards as part of the annual root and branch compliance audit.

ELB Partners, which also has a site at Purfleet in Essex, is still the only London-based business to hold the award, which recognises innovation including ongoing investment in the 60-strong fleet, additional camera technology to protect vulnerable road users in the capital and reducing emissions with the latest EURO6 engines.

Established as a three-person partnership in 1970, the full-service logistics company, which now employs 60 staff, secured the accolade – the highest voluntary recognition scheme benchmarking quality standards in the sector – as an early Christmas present.

“Christmas is associated with Gold, Frankincense and Myrrh but I am thrilled with the gift of FORS Gold for the sixth consecutive year,” said Pete Eason, managing director of ELB Partners.

“It is testament to the hard work of the team, particularly Dan Philpot who, as our new commercial director, has worked tirelessly with all members of the business to ensure our compliance was up to the required level to meet the demanding gold standard.

“But there is no rest in this business and we will tirelessly strive to maintain the standards that cover health and safety and environmental commitments. This continues to be a chal-lenge with wider adoption of city and town centre low emission zones.

“Regulations continue to change and inside London and other cities, including Manchester and Birmingham, there are many construction sites that will now only accept FORS-recognised standard deliveries.”

FORS encourages operators to take a more forensic view of their business to identify areas of strength to be exploited and improvements to be made. A successful assessment provides a business with reassurance that their operation is being run safely, efficiently and in an environmentally sound manner.

The FORS logo allows potential customers to readily distinguish those with FORS accreditation from other operators. Users of fleet operator services may also ask their suppliers to become FORS recognised.

Nigel Parkes, managing director of Pallet-Track, said: “ELB Partners and its team are to be congratulated for the well-deserved retention of FORS Gold recognition which underlines the business’s ongoing commitment to quality service to its customers and the broader Pallet-Track family.

“We work in an increasingly competitive market where customers are looking for operators who differentiate themselves on service and quality rather than price.”